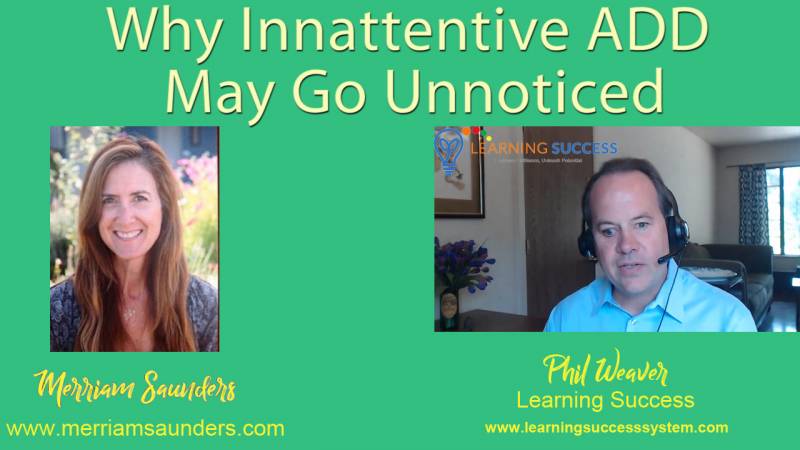 Phil:    So actually that leads me something. I just recently we have an online, dyslexia screener and I took the data from that screener and just did a really deep dive into that data. I found quite a few interesting things, but one of the interesting things that just was really baffling to me was that I found that these are parents taking the screener for the child and, just filling in. And I found that the boys that the screener is being taken for the median age. That was between five and seven. Maybe five and five and eight. The girls was between 14 and 16. Wow. These are girls that are having problems in reading. So whether its dyslexia or possibly the innattentive adhd, I don't know if there's a relationship here. but that just really, that stands out to me that this inattentive ADHD would not get noticed.

Merriam:    Yeah, that's interesting. I mean, I, I'm not all that surprised. I think because girls have a tendency to be, you know, I hate to stereotype across the board, but, right. It's just frequently girls might have a tendency to be more people pleasers , and we'll just push through and try to go unnoticed and just do what they have to do. And there could be a correlation.

Phil:    Yeah. Yeah. That's , I mean, everybody I've spoken to has had the same thing that girls typically have a higher on the agreeableness scale. And so therefore would go and then, you know, they, they use, I've, I've had girls in my class then the way they'll avoid things is being cute, you know, and, and it works. It worked, you know, and so, they can divert your attention from, from problems in a way that, their, they can be pretty skilled at it actually.

That might be when, oh, what's going on with this child? Starts to become a little more noticeable