Diagnoses do not define these Valedictorians

Doctors have the potential to say the most earth-shattering words to us. I have a great deal of compassion for the doctor that has to tell a person of a cancer diagnosis, the death of a loved one, or an incurable infertility diagnosis.

Have you ever sat in a doctor's office, staring across a desk, and received these cold, hard words?

I have. I remember the feeling and the helplessness. Those words could never be retracted, but even if they could, the reality could not. I heard, I swallowed, and my word was forever changed.

But what about the doctors and education experts that dish out the news regarding your child's abilities?

While parents will often appreciate some sort of an answer—a name and a limit—to the problem, what happens next often hinges on how the diagnosis is conveyed.

I hope your experience has been positive, but it isn't always. Sometimes what is conveyed is a permanent inability. The same finality is given to the diagnosis of a learning disability that doctors give to incurable conditions, like cancer or HIV. No mention of the incredible neuroplasticity of the brain (this means, the ability to change and improve). No suggested plan for how to move beyond a simple diagnosis. No mention of famous achievers with the diagnosis.

Or maybe it's your child's teachers that now conveys an attitude toward this diagnosis. I remember, as a special education teacher, a regular education 6th grade teacher asking me why my students with learning disabilities still had to attend regular classes with her. She wondered, if they were “too dumb to read on grade level, why should they sit with the grade level in my classes?” Learning disorder to her meant “dumb.”

I was livid. So livid I probably failed to her answer her question well. I more-or-less sputtered and muttered a few words and walked away.

I write this article in honor of the answer I should have given the teacher that failed to see my students' amazing intelligence in their current struggle with reading.

Diagnoses Don't Have the Final Say

A learning disability tells us that there is a portion of skills and abilities that are underdeveloped. They may be underdeveloped for many reasons: either because of the child's unique wiring at birth or because of a lack of opportunity to practice those skills. Regardless of the reason, what your child can and cannot do today will not be what your child can and cannot do tomorrow. The diagnosis a statement of today.

Tomorrow is a changeable possibility. The brain functions in some ways like a series of muscles. Work this area, and it grows. Actually, it's more like, “Run your brain down these tracks, and the ruts get deeper, and your brain will continue to run down them.” Practice making three piles of three sugar packets on the kitchen table today, and it will be easier for your brain to visualize three bags of three apples next time. It was a total inability yesterday, and today it's a bit of a stretch, but tomorrow you may have mastered it (or next month or next year or whenever). 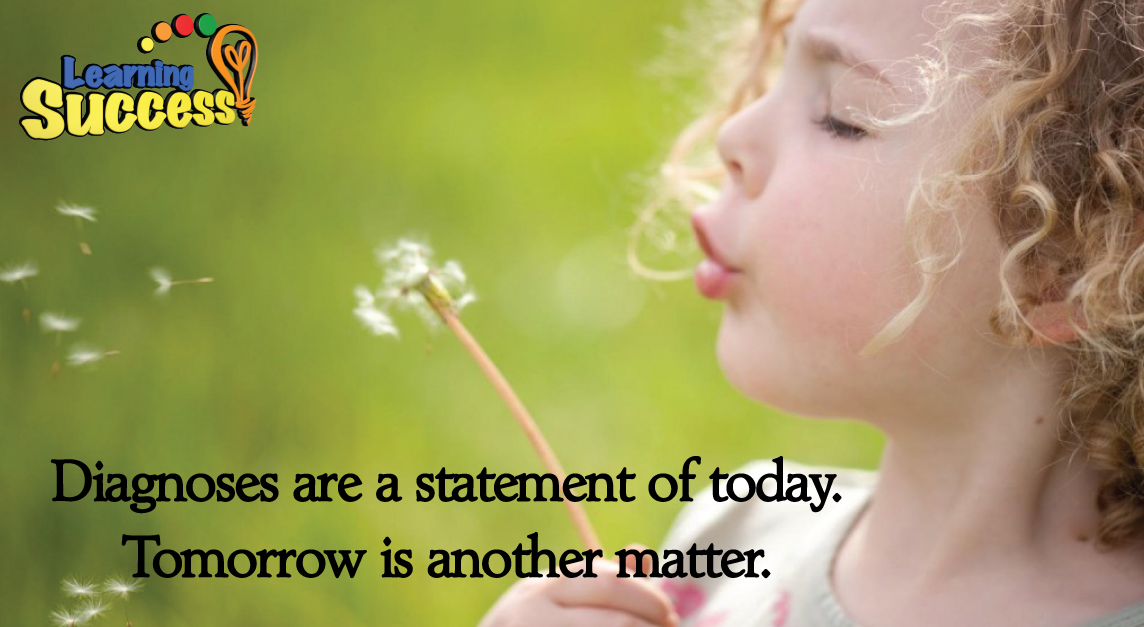 So Many Examples of Success

I was startled by the reminder of just how much a child can grow from an initial diagnosis when I read the story of Montel Medley, valedictorian of Surratsville High School. And a young man with autism.

I nearly jumped out of my chair and started clapping. Then I thought about my husband in the kitchen who might come in and wonder what I was clapping at. I thought I might be challenged to explain that, though I never met this child, I could have. He could have been any one of the many boys with autism I have had the privilege to teach!

Social and language skills offered this young man a significant challenge, and he overcame it. If you've ever known any one on the autism spectrum, you will adore his explanation for how he did it, “I followed directions, I paid attention to my teachers, and I did the work. And I’m planning to do well in college, too.” Yep, kids with autism usually excel in the areas of rules and directions, and apparently he decided to excel to the point of “Valedictorian” status. I'm sure he will do great in college, as he studies applied mathematics at Towson University.

I was once specifically instructed it might be best to guide the parents of my students with autism away from college dreams. Few would ever graduate high school, I was reminded. I ignored those instructions.

The thing is, Medley, while amazing, isn't alone. There's also Christopher Gross, who graduated from Augusta State University as class valedictorian in 2009. Gross has dyslexia and dyscalculia, and his brother has dyslexia and an auditory processing disorder. Gross's mother took both her sons to be tested at an area learning center when they were small. In addition to their official diagnoses, “experts” at the learning center told her, “neither boy would ever develop the intellectual capacity to attend college.” Both graduated from Augusta State together, with Christopher as valedictorian. Thankfully, they had a tenacious mother who convinced them that a diagnosis did not define them.

In 2014, Jalen Pope likewise defied the odds and early expectations set on him.His academic problems began in preschool, when he struggled to follow directions or understand class activities. He was diagnosed with literacy issues, speech problems, comprehension issues, and eventually ADHD, which seemed to be the crux of the problem, according to his mom. Regardless, he was set on an academic path that rarely leads to success. His mother tried everything, including medication, but none of it was working. In fifth grade, Pope was ready to be off the medication, and his mother and teachers came up with a plan to push Pope. Finally something worked. Amazingly, Pope also graduated Valedictorian from Josey High School. He reported that he hoped to study veterinary medicine at the University of Georgia.

If you're not tired of these amazing valedictorians with learning disabilities, Dustin Henderson is yet another positive example of refusing to be defined by a disability. In first grade, it became clear that he was different, when his classmates all began to read, but he did not. In second grade, the humiliation of spelling tests began. His mom reports, Henderson had a pretty important discovery in third grade however: one day for a project that “had something to do with math or science”, all of his friends kept asking him for help and thought he was smart. Though it took years of practice, effort, and help for Henderson to learn some of the language arts that other kids learned in lower elementary and still more years for Henderson to admit to his dyslexia. Hard work, however, led him also to becoming valedictorian of his high school and now to study at Oregon Tech University.

A learning disability tells us that there is a portion of skills and abilities that are underdeveloped.

Your Child Doesn't Have to Be Valedictorian

The point of these valedictorian stories of students with learning disabilities isn't that being valedictorian should even be the ultimate goal. The point is, the sky is the limit. Your child is just as amazing as you know, deep down in your heart.

And your child has passions, talents, and abilities that are going to lead to a beautiful future for him/her. Believe it and convince your child.

No diagnosis needs to define your child's ultimate future. Let's work together to help each other's children reach for their dreams and create a culture that ignores naysayers who think a child is limited by a simple diagnosis.

1
Diagnoses are a statement of today. Tomorrow is another matter.
2
There are so many examples of young men and women defying the "limitations" of their diagnoses.
3
The sky is the limit. Dream big.

The Amazing Talents of Children with Learning Differences

Barbara Dianis knows what it feels like to be cast aside and told not to expect too much from her life. END_OF_DOCUMENT_TOKEN_TO_BE_REPLACED

Are Girls Who Struggle With Reading Being Ignored? New Data Says Yes!
By Phil Weaver - 08 Apr 2019

New data shows that many girls with dyslexia may not be getting diagnosed. Or at least diagnosed much later in life. Without recognizing the problem they certainly aren't getting the help they need. END_OF_DOCUMENT_TOKEN_TO_BE_REPLACED

We've just released this data from our dyslexia test and what it is telling us points to easier solutions for reading difficulties. Take a look and tell us what you see in the data. END_OF_DOCUMENT_TOKEN_TO_BE_REPLACED

Dyslexia is a fairly common disorder, and can be determined by several indicators. END_OF_DOCUMENT_TOKEN_TO_BE_REPLACED

Finally, the U.S. Department of Education is stepping up to the plate in support of children with dyslexia, dyscalculia, and dysgraphia. Well, just a little anyway. END_OF_DOCUMENT_TOKEN_TO_BE_REPLACED