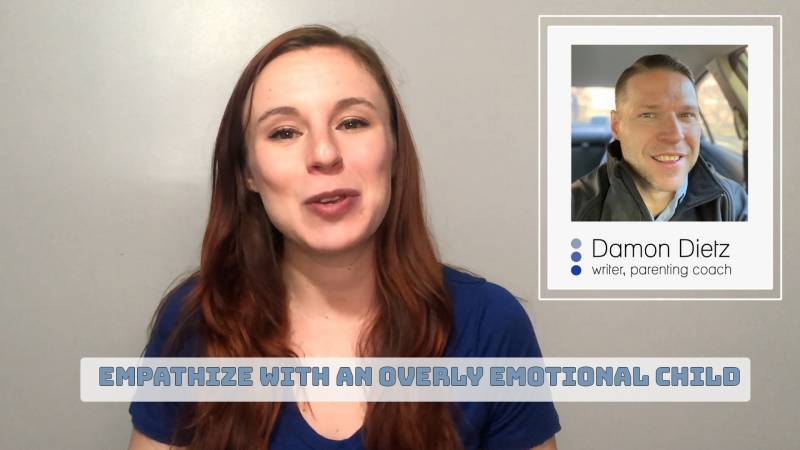 Empathize with an Overly Emotional Child

Empathy is the answer

Because once they know you're listening, there's no need to act out and cry and have a tantrum. There's no need to yell and scream at you. Then you mail it. You may still get some of that, but the majority of time, and I guarantee you, when you show empathy and you listen your child is going to talk to you about it, and then they're going to work through the problems themselves. I can't stress enough to not try to solve the problems of your children, as well as don't discount the problems. Remember, they're not little adults, they're not little versions of you. They have emotions that have not yet developed, and they're experiencing the world for the first time. So if they left their toy out in the yard and they're going to cry about it, don't tell them that that's stupid to do. Don't tell them that they shouldn't cry, ask them how they feel and let them know that you understand that, Oh, you know, what was he, when I lost my iPhone, I felt the same way.

This gives them. This gives them such comfort in the fact that you understand where they're coming from. And and since I've done that really with all my children, I've noticed a huge impact. And our relationships, our relationships have really developed further. And I feel like just circling back empathy, isn't necessarily something you are born with. Some of us are lucky and they are, we are born with empathy, but some of us aren't and that's okay, you can learn the skill. And once you have that skill, you can apply it in all facets of life, especially with an overly emotional child. So I hope these three tips have really helped you, and you can start implementing one, two, or all three of these tips immediately. They're not huge things that are going to take a lot of time. They're not things that are going to take.

Actually, they're not going to take a tremendous amount of effort. It's going to take some conscious thought. You're going to have to think about it. So when, when your child, your overly emotional child comes to you with a problem, or they're having a temper tantrum in the supermarket, or they're they're screaming or crying, or they're acting out at you, it's, you're going to have to step back. You're going to have to be mindful of what's happening. Take your deep breath, put your, put yourself in the position of your child, realize that they're not little adults. Don't, don't set your expectations so high and then show empathy, listen, and show empathy. And I really think that these three things are the keys to dealing with overly, overly emotional children. Thanks a lot, guys. I really appreciate it. Once again, my name is Damon Dietz and and I hope you really got some value from this. It's been my pleasure to talk to you today and have a wonderful, blessed day. Enjoy those kids. They only are at this age one time and overly emotional or not the connection that a dad or a mom makes with that child is a lasting impression and we want it to be a positive one. So thanks guys.

if you take the time to listen and have empathy, then you'll be able to really, really lessen the emotional outbursts from your child.