Executive function can be thought of as the command central of our cognitive skills. These are the skills we use to get things done, plan and organize, not procrastinate (task initiation), not do things we shouldn't do (Inhibition), respond to changing situations (shift) and monitor our own performance.  Two major cognitive skills involved in executive function are working memory and emotional control.

Executive function can be divided into hot and cold

Hot Executive Function Skills - This is how we function when emotions are high. Under emotional pressure our executive function skills can be quite different. Generally they will deteriorate as the amygdala heightens activity in the sympathetic nervous system and shuttles resources to the parts of our body needed for fight or flight.

Cool Executive Function Skills - Our executive function skills when we are not under duress or other heightened emotional states. In this state our cognitive skills operate optimally. 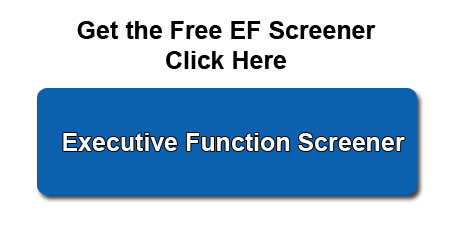 Note: Almost all children who struggle in academics are under constant stress. They are almost always in fight or flight mode. Their executive functioning skills are inhibited. This is why emotional control may be the most important of all of the executive functions for these kids. The other functions will always be inhibited until emotional control is gained. For this reason, starting with the body and learning mind-body techniques is often the most effective strategy. All other techniques, such as cognitive behavior therapy, will work better once the emotions are brought under control with physiology.

The main eight executive functions are:

1) Emotional Control - The ability to modulate or deal with feelings. In most cases rationalizing is inneffective. It can be used to understand them after the fact but you cannot rationalize away an emotion. This can cause talk therapies to be inneffective until some measure of emotional understanding is gained. Emotions can be repressed or not felt leaving the person with no access to them. Access can be gained through developing the mind body connection

2) Inhibition - This is the ability to control ones own thoughts and actions. In individuals with ADHD actions can come before or without access to the thought that produced the action. The impulsive action seemingly comes out of nowhere. This is why mind-body techniques can be so effective for those with ADHD or those with inhibitory problems. Mind-body techniques develop access to the underlying thoughts and the ability to control them. Additionally, techniques to control sensory input are very helpful.

3) Working Memory - This is comprised of several forms of memory that all work together. Visual memory, visual memory manipulation, auditory memory, and spatial memory. These are all connected through spatial awareness.

4) Initiation - The ability to start a task. Initiation can be difficult for many because of perfectionism. Anxiety caused by perfectionism will generally inhibit intiation. In other words, it causes procrastination.

5) Planning and prioritization - This relies heavily on visual memory and visual memory manipulation. The ability to use imagination to see oneself carrying out tasks or seeing what will be needed during the process of carrying out tasks. For most people these processes ussually operate below the level of consciousness. For those lacking these skills they must be developed at the conscious level before they can become automatic.

6) Shift - The ability to "Go with the flow". Being able to think and adjust as situations change. In the Eastern Arts this is a fundamental teaching. Individuals who have developed certainty as a top level emotional need will be lacking here. This is is due to attempting to control their environment to ease anxiety.

8) Self-monitoring - The ability to assess one's performance. High levels of anxiety will inhibit this skill

Together these skills make up executive functioning. If your child is having difficulty then they may inhibited due to high levels of anxiety. Physiology, confidence building, and other techniques can be used to eliminate anxiety. Additionally, due to the brain's neuroplasticity these skills can be strengthened. We are not stuck with the brains we were born with. This is despite the fact that the old idea that our brains do not change is still being propagated by many people and organizations. This idea needs to die. It is doing an extreme disservice to so many children and adults alike.

You can help your child grow and develop!

The article is about executive functions which are skills every person uses in order to process and act on incoming information. The eight key Executive functions are Impulse control, Emotional Control, Flexible Thinking, Working Memory, Self-Monitoring, Planning and Prioritizing, Task Initiation, and Organization. Each skill has a description and an example in the context of if the reader is a parent and their child is demonstrating weak Executive functions.