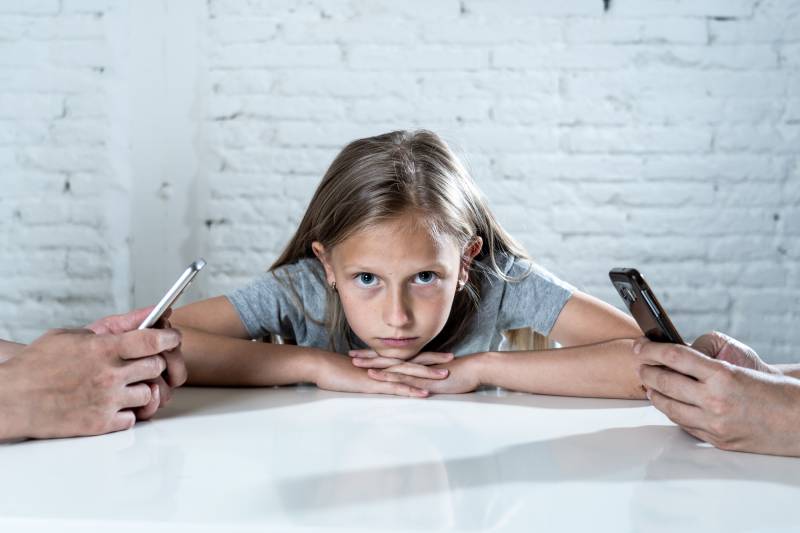 Are Girls Who Struggle With Reading Being Ignored? New Data Says Yes!

Data Shows More Parents Of Girls Are Searching For Help. But Not Until They Are Older

When we decided to analyze our data from the Learning Success Dyslexia Screener we found some very shocking results. Over 60% of those filling out the screener were searching for help for a girl.  Most accepted studies have come to the conclusion that there are far more boys having difficulty with reading than girls. Somewhere in the area of two to three times as many. So when we realized more parents were screening girls that put up a red flag and we investigated deeper. What we found was shocking.

Studies Disagree On The Prevalence Of Dyslexia In Girls

But a later study in 2004 refuted this early  1990 study. The 2004 study looked at four earlier studies.  These 4 studies were comprised of Representative groups from various countries.  The study looked at the bottom 15% of readers in these groups and found that the majority were boys.  The statistics showed that boys we're two to three times more likely to have a specific reading disability.  The Study Conclusion: "Reading disabilities are clearly more frequent in boys than in girls."

This subject has been contentious to say the least. The 1990 study got a great deal of press so created many advocates.  Yet opposing studies seemed to have more credibility. They had much larger sample sizes and had more duplication. So these studies generally have won out in the debate and it has been generally accepted that far more boys suffer from a reading disability.

What we found was that over 60% of those searching for and taking the screener were filling it out for a girl. These people had searched for terms such as "Dyslexia Test", landed on our website, and completed the screener. So presumably the majority of searches for "dyslexia Test" are people looking for help for a girl.

(All info was anonymized before preparing this report) 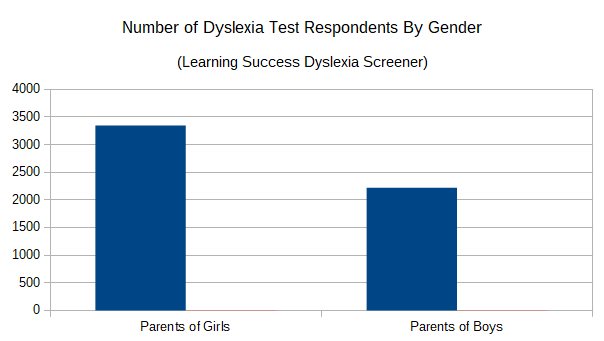 This, to us, didn't mean the debate had been won. The number of searches does not necessarily quantitive proof. But it did force us to stand up and take notice. And when we dug in deep to the data that's when we found the more interesting, and alarming data.

What is more important here is:

The boys in question were at very young ages. Ages at which intervention is much simpler. Ages where self-esteem has not yet been deeply damaged. The majority were between seven and nine. But for girls, this was much different. The girls were being identified much later.  Most in their teens or later. The bulk being between fourteen and sixteen.

Here's a chart of the data we discovered: 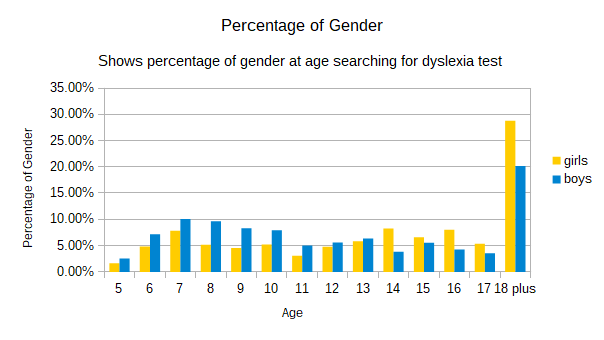 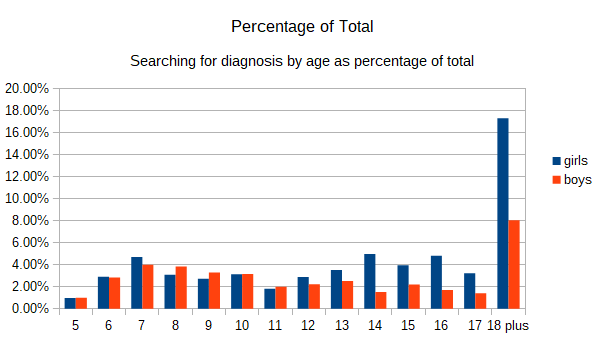 Or looking at the percentages below and above age 13 we get this graph. 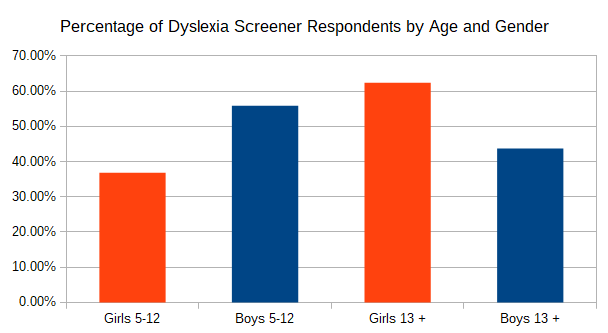 Here we can see that of all of the screeners taken for girls only 37% of those were taken below age 13. Whereas for boys 56% of respondents were below age 13.

A reading disability does not just pop up at age fourteen or fifteen unless there is some sort of brain injury or dementia causing illness. Signs will start early on as a child is learning to read. This is evidenced by the ages where the bulk of the boys were screened. So something else must be going on. Why are the searches for girls not happening predominantly until teens or later? Are girls just not getting the interventions they need and therefor falling far behind their potential?

Likely what is happening is that girls are generally higher on the agreeableness scale. Simply being more pleasant than boys may make the difficulty more hidden. Whereas boys are more likely to act out in some way the girls may conceal the problem. Especially since they are likely self-assessing as lacking in intelligence. It's possible that many girls just assume they are not intelligent and then do everything they can do to hide their perceived lack of intelligence. And since they are generally more emotionally intelligent they are more capable of doing so.

Some of these quotes by famous (and highly intelligent) dyslexic women tell a tale.

“I thought I wasn’t smart. I just couldn’t retain anything”

"I had a lot of trouble in school and was put into remedial classes. I thought that I was stupid"

Instead of realizing they have a specific learning disability, which is not at all related to intelligence, they assumed they were lacking in intelligence. And in this situation, many would initiate an all-out effort to hide their supposed lack of intelligence. Using every bit of their charm and social skills to divert attention away from the problem. I've personally seen this in action many times and admittedly fallen for it just as many.

While children of either gender often try to hide the problem, girls often being generally more socially skilled are more capable of doing so. And in so doing letting the problem fester and cause deeper scars.

Are girls who struggle with reading not getting the intervention they need?
Tweet now Follow Learning Success

The screener was designed in such a way that each possible symptom added one point to the score. Scoring above five meant a high likelihood of a reading disability.

Interestingly the test scores for the younger girls being screened were much higher. Maybe these girls were showing so many dyslexia symptoms that they were more easily spotted.

Notice that the boys had relatively consistent average scores across age groups but the younger girls scores were extremely high. So these girls were exhibiting a lot of symptoms. 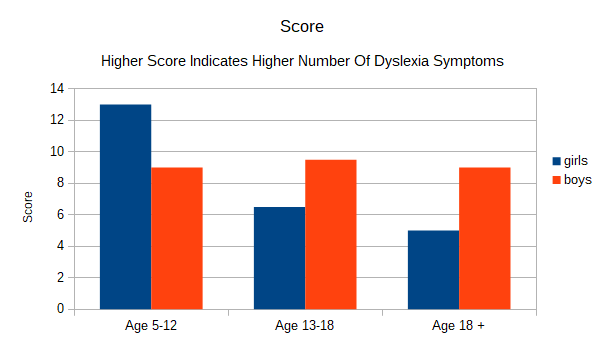 The girls were being identified much later in their teens. The bulk being between fourteen and sixteen.

This graph shows physical symptoms that may be related to anxiety. Notice the high incidence of these symptoms for the girls in their teenage years. There are multiple possible reasons for this, one of which would be anxiety over reading and other academics. 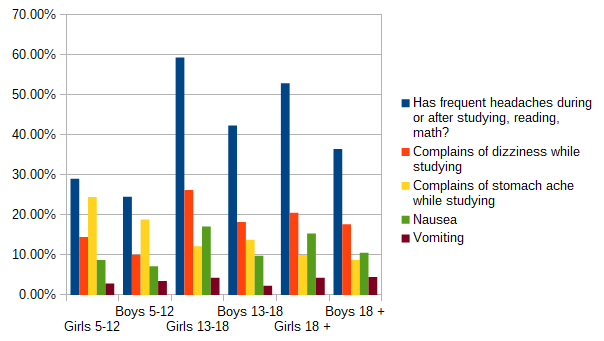 While these physical symptoms were higher both in boys and girls in their teens notice that the change is much larger in girls and also continues into adulthood much more than for the boys. 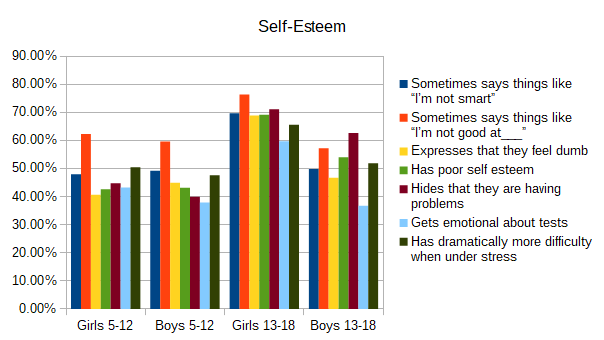 We can see here that symptoms of low self-esteem increased from an average in the low forties to an average of around seventy percent. A whopping seventy percent of girls are showing multiple indicators of dramatically reduced self-esteem. Couple this with the physical symptoms and I think we can reasonably say that a majority of these girls are also experiencing high levels of anxiety.

1
Girls Are Being Screened At Much Older Ages Than Boys
2
Most Searches For Dyslexia Help Are To Help Girls
3
Girls Are likely Not Getting The Remediation Needed
Early intervention is critical for the happiness and well-being of our children.

It is clear that the majority of girls (without a reading challenge) are actually better readers than boys.  Studies have shown that girls are far more likely to read for entertainment than boys.  And of course, this propensity for reading will develop reading skills.  Additionally girls, in general, have better language skills than boys.  Stronger vocabularies are developed earlier, more complex sentence structures are used, More complex word combinations, and even more communicative gestures.  And these differences actually expanded with age.

So it is possible that because girls are generally better readers that when a girl is suffering from a specific reading disability this may affect her emotionally even more so than it does a boy.  Maybe girls with reading challenges feel more ostracized because they are not able to enjoy reading in the way that their peers do. Reading is a social activity for many girls as they often talk about the books they are reading.

This would mean that the effects of a specific reading disability on girls are further reaching and may have far more emotional effect and additionally a deeper effect on self-esteem. Simply because it also affects their social life.

Are the majority of girls with dyslexia or a specific reading learning disability going completely undiagnosed and not getting the help that they need? Or at least not in time? From this evidence, it would appear so. It seems very clear that interventions are happening much later with girls or not at all. In today's education system interventions for boys are lacking, interventions for girls seems to be far worse.

Regardless of whether or not there are more male dyslexics than female dyslexics this still signifies that huge numbers of girls are not getting the help they need. They are simply being ignored. In this situation it is likely that their lives are dramatically affected and they will bear emotional scars and simply not live up to their potential.

Complaints abound for how our education deals with those with specific learning disabilities. This data might be telling us that a large percentage of girls are not even being recognized as needing help, much less getting it.

What Can Be Done?

Right now several US states are enacting laws that require reading disability screening. It is important that screening is done for all students, not just those that have been initially identified by subjective means. A reading disability, like any specific learning disorder, can be hidden. Especially by the hyperintelligent child. Many of these children have developed very powerful coping skills. Skills which can easily be used to conceal a specific learning disability.

Whether more boys or more girls have a reading disability is not nearly as important as screening for and identifying those who do. The earlier an intervention happens the more effective.

Over time children with specific learning disabilities lose self-esteem. The longer the problem goes on the deeper the scars of negative self-worth can be. Early intervention is critical for the happiness and well-being of our children.

Our hope is that this new information is spread wide. The more people know about this the more girls will be screened at an earlier age.

With the coming legislation maybe we can get this problem solved quickly if the right people know about it.

Hi, I’m Samantha from Learning Success and I made this video to help you understand why... END_OF_DOCUMENT_TOKEN_TO_BE_REPLACED

Dyslexia is no different. Catch it early... END_OF_DOCUMENT_TOKEN_TO_BE_REPLACED

If your child is struggling in school... END_OF_DOCUMENT_TOKEN_TO_BE_REPLACED

If your child is struggling in school then you can get them back on track with... END_OF_DOCUMENT_TOKEN_TO_BE_REPLACED