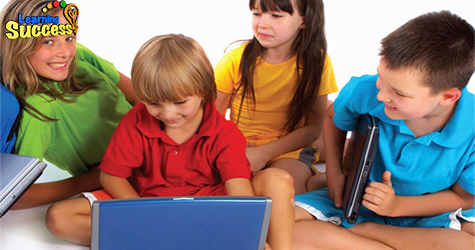 Computers and technology are amazing things. Today, I look around and see people of all ages using laptops, computers, smartphones, and tablets. These devices have become so common in everyday life. It seems like everybody has some sort of technology. Even my one-year-old knows how to work a smartphone.

My oldest child who is with autism loves computers. He even uses one to communicate, to make it easier for him to connect with others. The portable computer that he uses, known as a speech generating device, has transformed his world; it makes the world more accessible to him.

Technology in general has been used to open doors for students with disabilities. For example, Dynamic Learning Maps (DLM) is a new online assessment tool for children with various disabilities, ranging from visual impairment to dyslexia. This amazing, intuitive assessment has built in the accommodations from the beginning. It is truly an example of education for everyone.

But basics still out of reach

Pearson Education needs to follow DLM’s example. Recently, I came across a petition online by a college student, who found it difficult to access her curriculum. She reached out to Pearson, whose response to her was that if she couldn’t take the class the way it was presented then she shouldn’t take the class at all.

Wow, really?! The technology exists. What’s going on Pearson? As a leader in higher education, shouldn’t your materials be top of the line? I was taken aback, so I called Pearson to ask them for more information. A pleasant representative answered my questions as best she could. She said she was unsure and would ask someone else on assisting students in accessing online and print materials if they are visually impaired. She then sent me information on obtaining alternate text. But from her e-mail it was still not evident if there were accommodations for online material. She did mention in our conversation that Pearson’s My Lab was being replaced, but again it is unclear whether it will include any accommodations.

Who benefits from this?

Unfortunately, the process as it stands seems to be quite rigorous. First you have to contact your schools disability specialist, then provide documentation to prove you have a disability, and finally the school representative has to submit a request for you to Pearson for the accommodations you need. Also, it takes up to 10 days to receive any accommodation, if it is available. This also led me to wonder, is their website accessible? Since the student mentioned above is in college, I looked at Pearson Higher Education. I used a tool that can determine whether or not a website was compliant with the Americans with Disabilities Act. I found the Wave web accessibility tool and below is the screenshot of the results: 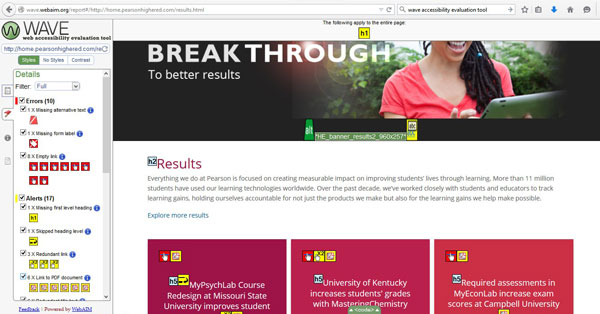 Everything highlighted in red or yellow indicates that there is a problem with accessibility. Green means accessible. As you can see there were 10 errors and 17 alerts. These problems included lack of alternate text for images, and having links with no descriptions. In other words if someone were to scroll over these items, they would not be able to know what they were. This is important not only for visually impaired students, but also for those with literacy disabilities such as dyslexia. 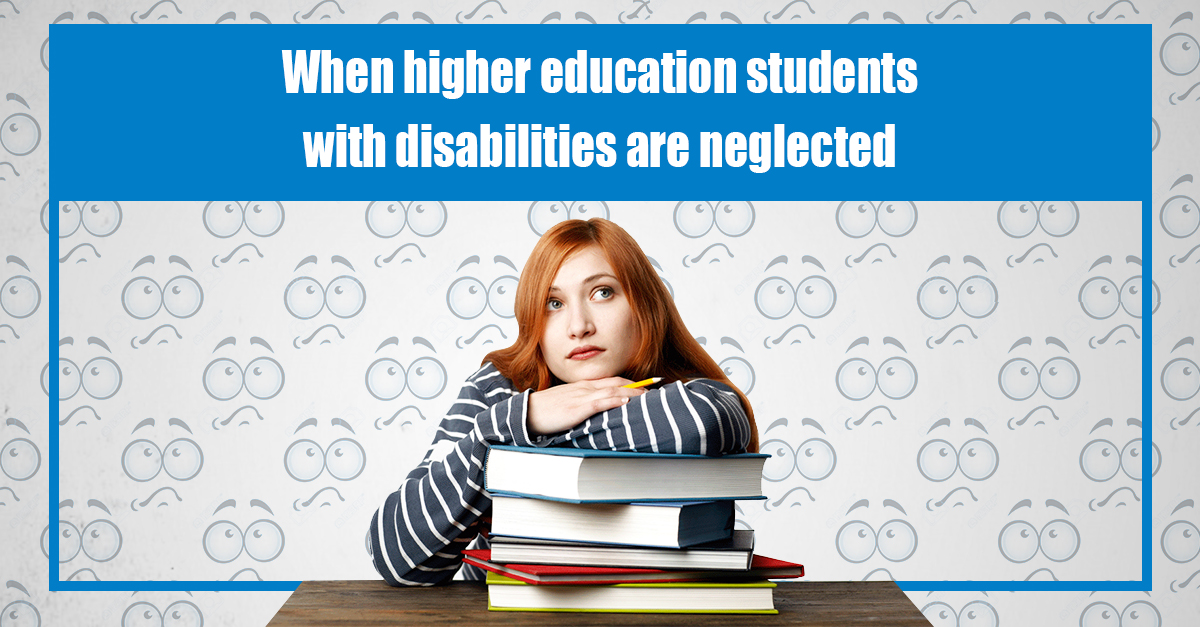 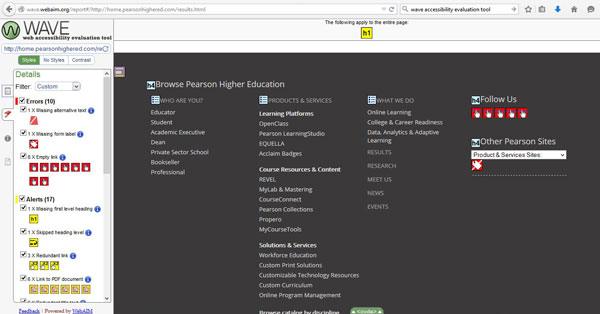 Not pity, but equality

As a parent of a child with disabilities, I am shocked and surprised by Pearson’s lack of online accommodations. Their website claims that “Pearson is focused on creating measurable impact on improving students’ lives through learning”.

But one wonders does this include students with disabilities? Does this include my child? Education should be accessible to all and that means everybody. Matt May, at the National Federation for the Blind, sums it up nicely: “When people with disabilities received legal protection, it wasn’t given out of pity. It was given to protect their right to participate equally in society.”

Dummy's guide to Common Core: what is and isn't