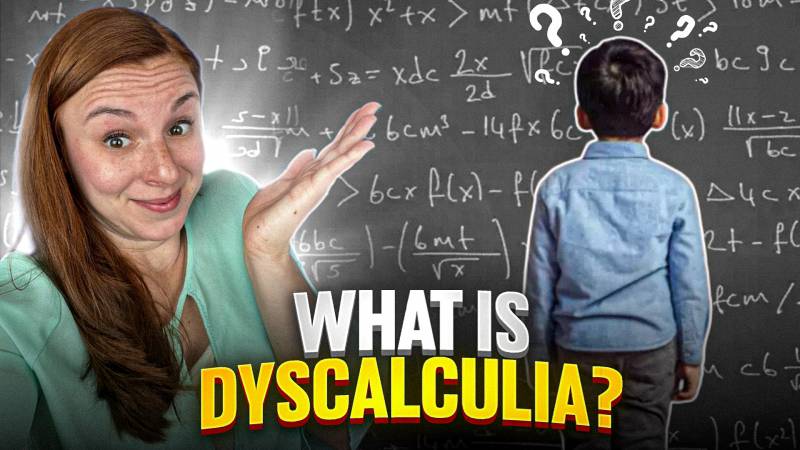 Have you ever heard of dyscalculia? Most people haven’t. Even though it’s very common. It’s one of those things that just slips under the radar.

But what is dyscalculia?

Dyscalculia is a specific learning disability that affects math. It’s not a lack of intelligence. Many with dyscalculia are very intelligent. They just struggle with math. And that could be for a few different reasons

Let's go over those. And the solutions.

But first, it’s essential to realize just how common it is. And that it’s not a life sentence. Many believe that it is just as common as dyslexia. It just isn’t as well known, so goes undiagnosed far more often. It’s so unknown that it is more commonly referred to as math dyslexia. Because, for some strange reason, dyslexia gets talked about a lot. Dyscalculia, not so much. Who knows why?

Some people call it dyslexia’s evil twin because of it’s similarities with dyslexia. Plus dyslexia and dyscalculia often come together. It’s estimated that half of the people with dyscalculia also have dyslexia. And maybe vice versa.

So many people go their whole lives not realizing that they have dyscalculia. And since they don’t know it’s dyscalculia,, they assume they lack intelligence. And again, it’s not an intelligence issue. It’s a math issue. But when someone doesn’t know about dyscalculia, and they struggle in math while seeing others get it. It’s very easy for someone to start thinking that they are stupid. Then they start trying to hide their problem because nobody wants to look stupid. And, well that makes things much worse. They get no help and they just keep losing more and more confidence in themselves. It’s a horrible downward spiral.

So remember, Dyscalculia is not a lack of intelligence. It is a specific learning disability that affects math. And there is a lot that you can do about it.

When children begin to think that they are stupid, they develop anxieties, and that can even turn into learned helplessness. They freeze up. They stop trying and wait to be rescued. They stop working on problem-solving skills altogether.

And even worse. Their problem often gets mistaken for laziness. So they are told to work harder. Sometimes given more and more homework. In other words, they are given more and more of the same thing that hasn’t helped them. Which just frustrates them more, makes them feel even more stupid, and causes more and more anxiety. Can you see how this little problem can escalate into a huge problem?

Not just in math. The low self-esteem that follows affects everything.

So what exactly is dyscalculia and what can you do about it?

Problems in the underlying skills lead to problems in higher-level skills. And that’s where dyscalculia gets noticed.

Dyscalculia, like dyslexia, has several possible causes. Let’s get into what those are. But before we do that, I need you to realize one thing. Brains can change. Yes, a learning difficulty can be very challenging but it’s important to know that the brain has plasticity. It can develop new capabilities. No one is stuck with the same brain. If given the right stimulus, a brain will continue to change for a lifetime. Overcoming even the toughest of problems.

Why is that important to know? And be sure to remember?

And because neuroplasticity is a recent discovery, the old myths still hang around. People are still, even today, propagating what we now know is wrong. And getting that wrong is life-changing.

So many people will tell you that you are stuck with a learning challenge for life. That there is nothing you can do about it. That’s just not true. But when people believe it’s true, they won’t do anything to try to improve. They just give up. And that is a sad fate. So remember. Brains have plasticity. They’ll change over an entire lifetime if you challenge them to do so. And there are proven ways to do that.

Now, let’s get into the different causes of dyscalculia.

First, there is almost always a visual-spatial component. Those with dyscalculia will also often have problems with spatial reasoning. Things like left and right, or over and under. They may have problems reading maps.  But nowadays we all use navigation, so that might not get noticed.

You can learn more about developing the visual-spatial here.

Another underlying cause is a difficulty with quantities. Scientists have found that most people can identify a quantity just by glancing at it without counting it. There is an innate ability to just know how many things there are. In other words, we have a quantity sense. Of course, since these things are in space, quantity sense could also be related to visual-spatial problems.

Having this sense of quantity greatly increases math fluidity. If a person does not have that skill, math is going to be far more difficult. Even simple concepts such as more versus less will be challenging. So drilling underlying skills such as quantity recognition can be a big help.

Someone with dyscalculia may also have difficulty recognizing the relationship between numbers and the quantity that number represents. But, of course, if they are already having difficulty with quantities then of course they would have problems with the symbols that represent those quantities. Makes sense right?

Another possible underlying cause is difficulty lining up numbers on a page. This can be related to dysgraphia or even just a problem with fine motor skills. Dysgraphia is a difficulty with writing. It’s also common to have both dyscalculia and dysgraphia.

Challenges with these fundamental underlying skills can lead to all sorts of trouble with higher-level skills. I know that should be obvious, but I had to say it because so many people will just keep forcing the child to work on the higher-level skills when it’s these fundamentals that are the problem. This is horrible for the child’s self-esteem. Their anxiety will increase and their self-esteem will just keep getting worse and worse. But it happens everyday. More practice is almost always the recommended solution. It’s just, it doesn’t work. Because they are practicing the wrong things.

Problems in the underlying skills lead to problems in higher-level skills. And that’s where dyscalculia gets noticed.

Things such as having just a basic number sense or fluidity with numbers. Relationships between the number symbol and the number spelled out as a word. Being able to estimate. Counting. Basic math functions. Understanding patterns. Sorting. Counting by 2’s, 5’s, 10’s or whatever. Understanding math rules.

It will also lead to trouble with essential life skills such as reading a clock or a calendar. Scoring in games. Measuring ingredients in a recipe. Understanding money or making change. We use these skills everywhere.

It can also affect memory and attention. There are two reasons for that

And 2) They’ll have developed anxiety. Anxiety shuts down the prefrontal-cortex. And that’s the part of the brain they need to learn and to think. Anxiety actually reduces cognitive abilities. And decreases attention span.

That may even cause them to be misdiagnosed with attention deficit disorder when the real problem is dyscalculia.

So rather than pushing them to memorize math facts or practice more, it’s always better to work on the fundamental underlying skills. Since they have probably lost confidence it’s also important to work on confidence. Additionally, it’s good to do exercises that enhance neuroplasticity and neurogenesis so that brain has its best chance to adapt and grow. You can find all of that in the Learning Success System. Fundamental building blocks of learning, confidence building techniques, and neuroplasticity techniques. Get a free trial of the Learning Success System here.

And if you want to dive deeper and have a better understanding of whether or not your child may have dyscalculia, we’ve created a quick test. You can get it here.


Do You Need help with a Dyscalculia Difficulty?

When math doesn’t add up – a dyscalculia primer

It is a positive, not negative, mindset that enables learning

When Parents Take On Their Kids’ Learning

Want to improve your kid’s math? This school shows you how