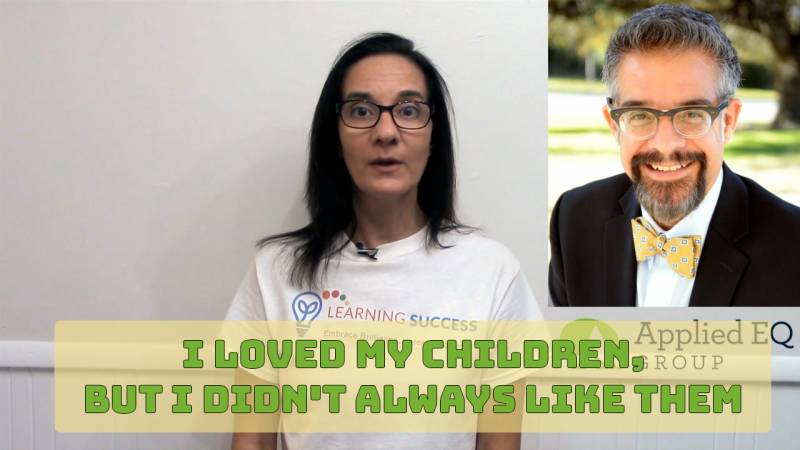 I Loved My Children, But I Didn't Always Like Them

How to be an integrated parent

It was safe to share my failures as well. So that was a big piece of me learning how to be an integrated parent, to be an honest parent, to be an authentic a parent. And as I grew in my ability, to be honest with my emotions, honest about my emotions, no matter how ugly they seemed or how wrong or inappropriate they may seem just to acknowledge that they're there. And then number two, to find a safe place to talk about them that didn't do damage to my children or anyone else that didn't shame anyone or blame anyone or condemn anyone. Once I found a safe outlet for that, I was able to regulate my emotions and express them in a way that was appropriate. And the beauty of that is that once I finally learned to be authentic and real with myself about what I was feeling, and once I found a safe place to express my feelings and talk about them openly, then I just felt lighter.

And I felt cleaner in a way, going back to my children, feeling like I hit a reset button, you know, and I just had a a new measure of grace for them and understanding and compassion and love. And it's, it was just incredibly valuable to me as a parent to, to learn that personally, it's not something that you read about and, or I read about in a textbook and knew it in theory, but it wasn't until I lived it and practiced it, that it, that it took life from me. So again, I would say you know, to, to fellow parents, you know, out there that are, that are struggling number one, whatever your emotions are just own. It just be real with it. Don't, don't sugarcoat it, don't gloss. It. Don't try to perfume it or, or just what it is, what it is.

And, and it's okay for you to feel whatever you feel. And then the second thing is to control those emotions effectively just find a safe place to express them, find a safe person to talk about them. And if you don't have a safe person, find a journal that you can write those feelings out unfiltered just as they come, true thoughts. And then after you write it all out, you can burn it. And nobody has to know but it was a good place for you to get it out. So I think those are the two things we often think about your feelings and find a safe place to express them. And I think it'll go a long way in keeping you charged and, and where you need to be to, to love your kids effectively.

I struggled with the guilt of, I don't always like this child

I Loved My Children, But I Didn't Always Like Them - Dr Adam Saenz